There are several ways to follow in the footsteps of others. You can meticulously plan (using maps, a compass or a well written guide), you can wing it and hope for the best, or you can use GPX files to accurately track your movements on course.

It wasn’t until recently that I started using GPX files because previously I just wasn’t sure how. Initially I thought it was as easy as uploading them on to my Forerunner 220 and perhaps my watch would just tell me where to go? I was puzzled when I couldn’t because my forerunner does produce gpx maps through the Garmin software but isn’t sophisticated enough to read it. I thought about buying something sophisticated enough to read these files but even then I found it unclear. Finally, I asked a friend and he suggested I try an app on my phone.

I downloaded several apps before I found one that worked well for me. You can find the GPX viewer app I use here, for Android.

Next you can find downloadable GPX maps on MapMyRun, Wandernet, or several others that make GPX data downloadable from their site.

Download and save the file on a suitable place on your computer.

Next, I created a file folder in the main menu of my phone for the GPX files called GPX maps. You can then put as many as you would like to reference in this but remember to rename them after downloading, to make them easier to reference. 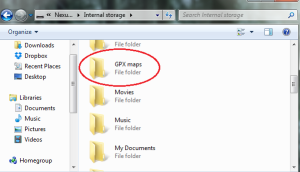 Next you go to the GPX viewer app on your phone and open the app.

The screen will automatically take you to a map of the area you are in. Top right side you can press “load tracks”.

Scroll back to the parent directory until you can find the folder you made, and load the map you would like to use.

When it loads,  you can see where you are in relation to the trail. You can check often as some trails are difficult to find or follow. You can also scroll in and out to make the map bigger or smaller. In this picture I am the blue dot circled in red, and the green is the track that I’ve loaded.

Using your phone as a GPX reader is great because you don’t have to buy/carry another device to load maps. The software is easy to use and accurate, always showing your location and the loaded track so you don’t get lost. But this can be a drain on your battery so remember your external power pack and a plastic bag in case it rains!

Note: You can find the Garmin map file or GPX link at the bottom of every post on Taipei Running.