Sunday, January 4th saw the 10th annual Big Foot Ataya Cup Marathon held at the Ataya resort (泰雅渡假村) in Nantou. With a turnout of approximately 5000 people for the full marathon, half marathon or 9km distances, it seemed a notable event. Notable not only for the people living in the area but for the many people who came from all over the island to participate in one of the first marathons of 2015.

At 8am we were off! All 3 groups started together. The areas behind the starting line were divided according to a runner’s expected finishing time, but it seemed as soon as we started running that not many people observed the signs and it was a bit of a free-for-all, with children and families running the 9km, along with half and full marathoners. This

was a bit disappointing as the first stretch was an enjoyable downhill, although many runners were focused on getting around or avoiding slower runners.

The 9km loop was not nearly as impressive as the longer distances, the short course left the Atayal resort, going down hill, before flattening out near a residential section turning around and heading back to the resort. Although not as scenic as the other parts of the course, this small loop was relatively flat, varying by only 60 meters of elevation before we headed uphill to join the half marathon runners.

After the park entrance (and the half marathon turnaround) the course increases immensely, both in difficulty and in beauty as it winds around the mountains on one side and the river below on the other. As the course changes in elevation, the forest changes from palm trees into large pines and the

difference in scenery is impressive. It seems the 42 km runners pay dearly for this beautiful scenery, after leaving the half marathon turn around they are faced with close to 300m increase in elevation over 5km before turning around and running the final 15km almost entirely downhill.

According to the race website, the highest elevation of this course is 798m but according to my Garmin the highest elevation was 816m with a total elevation gain of over 1500m in the 42 km course. Needless to say by the time we reached the turnaround for the full marathon we were exhausted. Fortunately, the other runners were encouraging as they passed each other, everyone battling the hill together. At the turnaround, which was at the end of the road, there were cheerleaders, coffee, tea, biscuits etc, and I felt as if I had reached the very end… of the race! Victorious! Sadly not .. grudgingly, but with somewhat lifted spirits, I grabbed some coffee and headed downhill.

Unfortunately I didn’t reserve much of my energy for the run down and assumed somehow it would be easy. It wasn’t long before other runners were passing left and right, as they had obviously done a better job at saving themselves for the return journey. Even though it was tough and I had mentally lost the battle, I couldn’t help but feel giddy at being on the returning side of the hills. The steepest part, 4 km on either side of the turnaround, seems like a major feat once complete but runners still  have 9 km of dips and rolling hills and a final 2 km uphill slope to complete before reaching the finishing line. 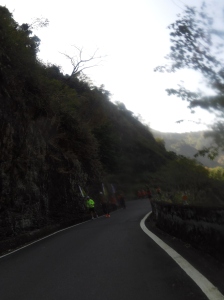 Overall it was a beautiful day for a race, and especially for the first marathon of 2015, I ended up with 8th place in my category, which leaves plenty of room for improvement this year. My largest oversight for this race was not studying this challenging course carefully or understanding what those hills, both up and down would really take to run.

The marathon was well organized with kilometer markers at every km, which was both a blessing and a curse,  as some kilometers ticked by much slower than others. The time limits were actually a little tight for this hilly course, 3 hours for the half marathon and 6 hours for the full. There were plenty of aid stations, well stocked with oranges, bananas, chocolates; one aid station, close to the half marathon turnaround even offered noodles, but with the tight time limits, I’m not sure if many had the chance to partake. One aid station 3km from the end even offered a 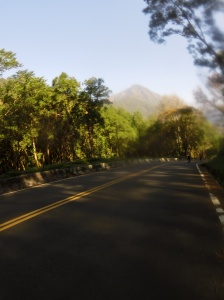 cup of beer for runners interested in celebrating early.

The only downfall of this race was the serious lack of bathrooms, not one aid station had portable toilets,  there were infrequent signs along the course pointing to park restrooms, far off the road, which I felt was insufficient for a race of this size.

The volunteers were helpful and the course was beautiful, showcasing some of Taiwan’s more unique and interesting mountain scenery. So, if you are looking for a challenging first marathon of the year and would like to make the trip to beautiful Nantou, Taiwan, this is an annual event, promising a different way to invite in the new year. 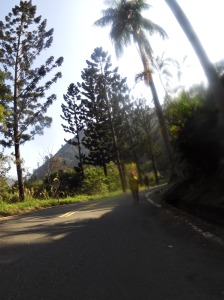 There is a direct bus, taking approximately 3.5 hours depending on traffic directly to Puli from Taipei West Bus station (1832). From Puli, there are buses or you can take a 30 minute taxi ride to Atayal Resort (泰雅渡假村). If you would like to rent a scooter, the best bet would be to go to Taichung, rent a scooter and make the 1+ hour journey to the resort. Luckily, we had the support of the Taiwan Beast Runners who helped to organize our stay in lovely Nantou, thanks again!