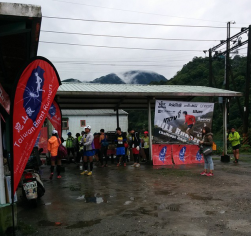 It’s been refreshing to see that in the past month we’ve had some new race organizers bringing a different perspective to the trail race scene in Taiwan. I, unfortunately, missed the Runivore race earlier this month but had the pleasure of participating in the Beast Runner’s first independently organized race, the Inov8 Hill Runner 700. There are few races in Taiwan that solely embrace the vertical element of running, Taipei 101 Vertical World Circuit, Climb To The Top Of Taiwan are a few, or Action Asia’s 50km, with elevation gains enough to qualify it as part of the Skyrunning Circuit, but the Hill Runner was yet another take on encouraging runners to demonstrate their vertical prowess.

Participants ran only 3.3km of distance with a 700m climb in elevation, almost entirely uphill, which averages out to a 21.2% incline (wow, that’s steep!). Of course, I am only fully understanding the seriousness of this race as I write. Prior to the race, I completely underestimated the physical exertion it would take to climb this hill. My mantra, at the end of any longer distance, is that I can do anything for 3km, which I now know is not always the case.

Runners were sorted by age category and let off at 15 minute intervals beginning at 8:00am to ensure the course was never too crowded. Groups were led from the event area to the starting line, a 200m walk, before lining up. The race started with a tiny downhill road sprint, before turning steeply uphill, where we began the steady climb. I started

out enthusiastically, sprinting, running, jogging and eventually shuffling uphill. It wasn’t until the 2km mark that I finally felt my competitive nature come alive, at which point we were quickly nearing the top. The course took some encouraging dips before a last uphill, and finished! The  course record at the end of the day, 34min 54s, proves just how challenging 3300m can be in the Taiwanese wilderness.

After runners reached the top and celebrated their victories, we had still to overcome the logistics of returning to the event area at the bottom of the hill. Runners casually made their way down, enjoying the beautiful trails of the Wulai area. After approximately a kilometer, there was a fully stocked aid station for participants to take a break and enjoy a snack before finishing the 5.6km return trip. 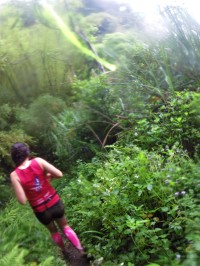 As runners made it back to the initial event area, they were offered lunchboxes, drinks, finisher medals and certificates. The Beast Runners  also collected substantial prizes from sponsors for the top finishers of this event, including Invo8 trail shoes, Titan compression socks, Runivore chia bars and Asia Trail magazine subscriptions. The event was well organized and the race atmosphere was inclusive and inviting. Besides the successful event, the Beast Runner group organized several trips to the course, pre-race, to allow runners to familiarize themselves with the course. Overall, it’s nice to have new race coordinators to add their personal touch to Taiwan’s expanding running scene.

If you would like to practice for the next Hill Runner event you can find the GPS map here.