Action Asia Events has become synonymous, in Taiwan, with its grueling annual Otterbox 18k trail race held in Maokong. In 2014 they held an inaugural event of a different kind. A 50k trail race with total elevation gain of more than 2500m, making it a qualifying race for the international skyrunner series.

Surprisingly, despite the country’s copious amount of uninhabited jungle, ultra trail running, in Taiwan, is still in its infancy. In this debut, the 50k attracted 156 participants island-wide, including some overseas runners,comparing nicely to the turnout Action Asia sees in its Hong Kong 50k runs. Shorter distances were also available for participants in the form of 5k, 13k, and 21k trail runs.

At 5:30, in the predawn stillness, the 50k participants lined up excitedly at the start line donning their mandatory headlamps, mentally preparing themselves for a long day of running. There was a mandatory packing list for runners including headlamps, a cell phone (with an extra battery), whistle, compass and hydration pack of at

least 2 liters. These essentials would ensure that no one got lost in the vast wilderness which surrounds the Shimen reservoir area. The race had 5 checkpoints, placed at no more than 12km from each other and some as close as 6km apart, supplying runners with salt, crackers, fruit and water.

Start to CP1 (11k) – A good introduction to this hilly course, the first 2km was a gentle uphill road run before starting into the trail. This first section of trail is well groomed, as it contains many popular day hiking trails in the area. Six o’clock saw the sun slowly rise over the mountains and lake, making it a pleasant start to the day.

Course planners were successful at avoiding weekend foot traffic of this popular hiking area by having participants run the most developed section of course in the early morning. This initial trail features paved steps, sloping hills, and a mixture of dirt trails combined with small paved sections. Although this non-technical footing makes for an easy run to CP1, the elevation gain and loss is significant as you wind around the reservoir. 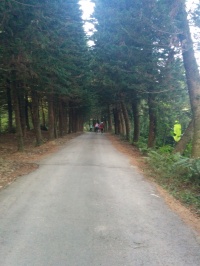 CP1(11k) -CP2 (20k) – The first checkpoint is on a narrow strip of road overlooking the Shimen reservoir lake and the dam below. This was where the faster runners (who started at 6am) from the 21k trail race started to catch up to the 50k runners and overtake.

Between these 2 checkpoints is considered the easiest part of the course, with 5k of gradual uphill trail running followed by a substantial section of road running. By the time we reached CP2, only 9k after CP1, it hardly felt like we should stop again before proceeding into the more heavily forested section of the course.

CP2 (20k) – CP3 (27k) At checkpoint 3, runners start to head away from the tourist area and into more grueling, heavily varied terrain. It is a mix of large sections of bamboo-lined trail, dense forest, thick grass fields and steep rock. Things here become mentally and physically challenging. As you overcome hill after hill, civilization slowly disappears behind you, as you distance yourself from the well known areas of Shimen.

CP3 (27k) – CP4 (32k) Checkpoint 3 is beautifully situated on the cusp of a large ravine. The checkpoint is in good view as runners make their way down a large hill to arrive at CP3. From the vantage point of this stop, you can also see runners as they leave the rest area and begin to trace the narrow path along the side, down to the bottom of the ravine. Once out of sight, things become a little more challenging, this stretch of trail sees the highest elevation of the course, and 5km to go before reaching the far end of the course where they will begin to make their way back to the finish.

CP4 (32k) – CP5 (40k) With only 18k left from CP4 to the finish line, things are looking good at this small, insignificant checkpoint. By this distance, competitors have spread themselves throughout the course, the forest is dense and encompassing, with a distinctly uninhabited feeling. This is understandable, given that this is the farthest corner of the 50k course. 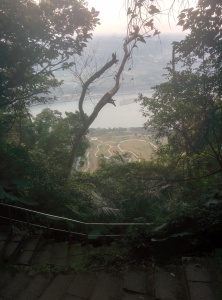 CP5 (38k) – Finish – This is a brutal way to finish an otherwise mostly pleasant race. The course from here climbs and dips sharply as there are many small steep peaks. Runners are back in civilization now, sharing some small parts of the trail with local hikers. Although, the end of this exhausting day seems very tangible, the end of the race is somewhat elusive. The course takes you up and down, bending towards the lake. Finally, you enter a last set of paved stairs, which will take you down to the parking lot and finally to the finish line.

Overall, it was a great course, well marked, very challenging, with lots of variation. The volunteers and the staff were helpful and knowledgeable. The course was frequently dotted with well stocked aid stations, and the crisp November air kept the heat and humidity at bay.

You can find the GPX map here and a link to Action Asia’s events here.